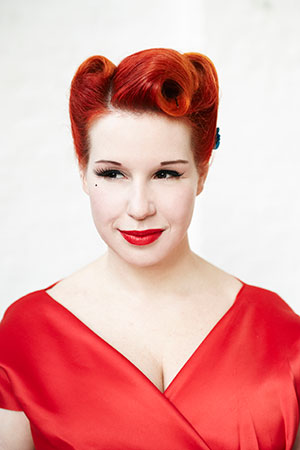 Angel Adoree is the 1940s vintage-clad redhead from East London who shot to fame in 2010 when she won the hearts of the nation (and the backing of entrepreneurs Deborah Meaden and Theo Paphitis), after appearing on BBC2’s Dragons Den.

Founder of The Vintage Patisserie, a glamorous hospitality company, and author of the best-selling Vintage Tea Party series, Angel has touched the hearts of many a vintage fan.

At an age when most girls were stocking up on Clearasil and dreaming of ponies, Angel was already out thrifting. Obsessed with the elegance of a bygone era, the 13-year-old’s pocket money was spent on vintage clothes and trinkets procured from car boot sales and second-hand shops. Undeterred by the fact that most of the items didn’t fit her, Angel and the overflowing collection moved to London in 1995, where she set-up a stall selling vintage finds at Old Spitalfields market.

When Angel moved into a converted East London School House in 2000 she started a night called The Angel-A Vintage Experience where friends and the fashion pack would come every month to listen to Jazz, try on and buy vintage clothes, and enjoy delicious food. Copious amounts of wine and laughter always aided sales and The Experience became a huge success.

With Angel’s eye for styling and hands-on approach to making clothes, many assume she’s a graduate of Central Saint Martins. However, the delightfully perverse Angel is actually a fully qualified chartered accountant with a business studies background, who spent much of her 9 to 5 advising companies on profit and loss.

But Angel’s dream was to turn her passion for all things vintage into a brand with the potential to grow. Encompassing everything she did with her Angel-A nights: food, fashion, fun and hospitality.

In 2006, she trained as an image consultant at the prestigious Aston+Hayes Institute. The following year, all the relevant experience in business, fashion and hospitality paid off, and The Vintage Patisserie, an online retail outlet and event company was born.

In 2010, hungry to grow the business even further, Angel appeared on the BBC series, Dragons Den, where she won the investment of Deborah Meaden and Theo Paphitis. After the show, the partnership did not come to fruition but Angel and Deborah remain friends to this day.

Angel’s big personality also secured her an agent who introduced her to TV presenter and author, Dick Strawbridge. It was love at first sight for Angel and Dick and the couple married in November 2015. They have two children, Arthur (2013) and Dorothy (2014).

In January 2015, they left their home in the UK and made their way across the Channel in search of a more balanced life in  France.  Having purchased a 19th-century chateau in the Pays de la Loire, Dick and Angel have embarked on a restoration project of a lifetime.  Utilising their hosting skills and passion for good food and entertaining, the chateau is available to hire for elegant vintage weddings, retreats, and other special events.  They were married at the chateau in November 2015, and their adventures have been made into a three-part Channel 4 documentary, Escape to the Chateau, which premieres on Sunday 5th June 2016, at 7pm.

Your journey to your perfect wedding starts here